The Overdrive Arrives THANKS to OTT Industries 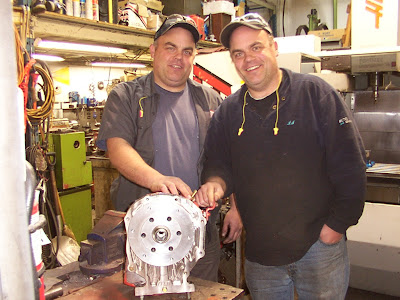 Long awaited time has come, and by the smiles on these guys you just know they are proud of their creation. They should be! it has taken hundreds of overtime hours to build the Goldenhawk Special overdrive/speed doubler.
It is the brain child of the "Olson twins", Chris and Ben of
OTT Industries. A little history is appropriate at this time, for it was at our first meeting to discuss the project and sponsorship possibility in December of 2004. At that meeting we discussed the problem of the diesel being strong and heavy internally and that it would not want to spin the rpms required to go real fast given the gear ratios available. The Olsons came up with a suggested solution. They would take a rare part from a 1973 vintage ambulance conversion, a cross between Chevy and Ford parts, remake it to run backwards and re machine all the insides to produce a speed doubler that would bolt to the rear of the transmission overdrive unit and then double the output shaft speed. Sounds good to me! However it was not obvious to the unsophisticated person just how much is involved.

NitroLube is now an official part of the You Tube community. Can you believe it.Yahooooooo
If you wish you may pass it along to your friends.
thank you
Jason 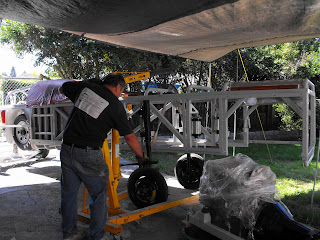 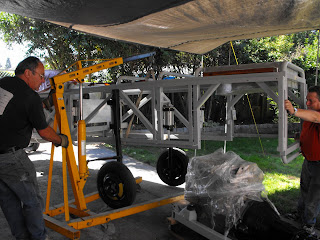 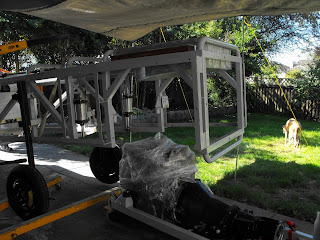 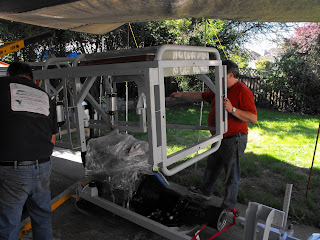 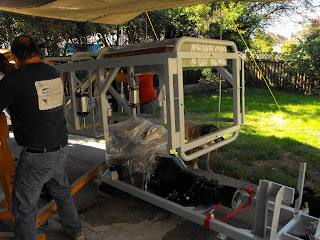 The following pictures were taken by Tina Knox when Kevin and I installed the race engine and transmission and front drive unit in the main chassis frame.
Note that the frame joins with the three bolts at the firewall and swings up to the machined locator's at the front and then the air rams are connected. We begin by placing the power train frame on the floor and hoisting the chassis to clear the engine. Then lower the chassis onto the landing gear and roll it into position . Then we lift the engine and power frame up to connect the three machined bolts.
When the quick connections, and hoses are all completed the engines may be swapped by a full crew in a short time.The operation takes only about 45/60 minutes for two persons and that is using the basic shop hoist, it goes much quicker with an overhead crane like at AGGRESSIVE TUBE BENDING.
(Remember to click on the pictures to enlarge them.)
Posted by Randy at 11:59 PM No comments: 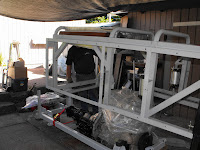 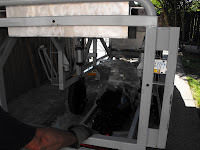 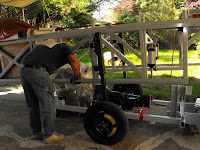 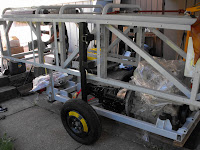 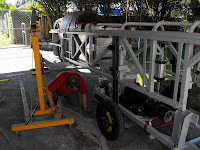 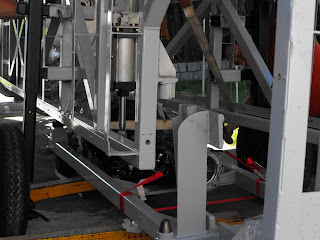 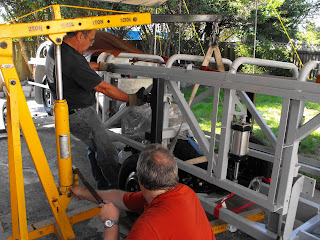 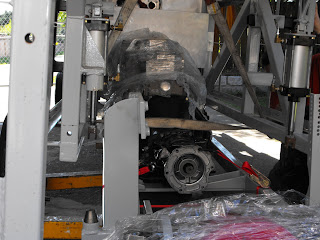 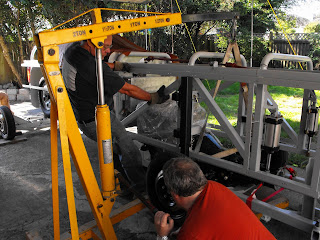 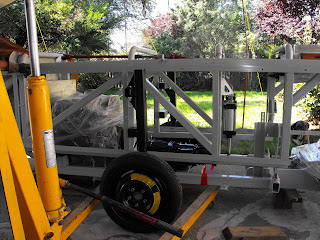 Nothing is ever simple. 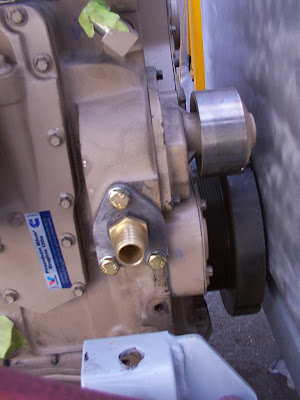 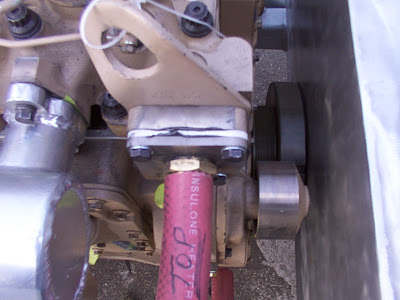 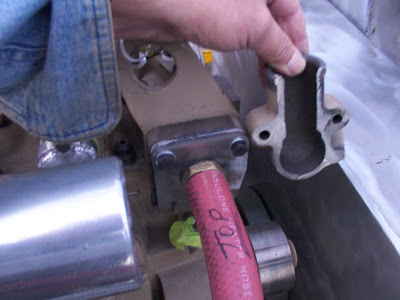 We intend to pump the cooling water with a 12 volt hi volume pump from the tank to the engine. To this end we simple made a plate to tap in the fittings and attach the hoses. RIGHT? No we had to modify the original by slicing it in half and adding our plates. ! hour of work turns into 10 as usual. Thanks to Kevin Knox (DIVERSIONS) for the modifications and to Sean Frankforth (FRANKFORTH's WATER JET CUTTING)for the cutting of the plates and to Brandon (INLINE SALES & SERVICE) who tapped threads for the fittings.
Posted by Randy at 11:17 PM No comments:

Hawk One Loud and Proud! 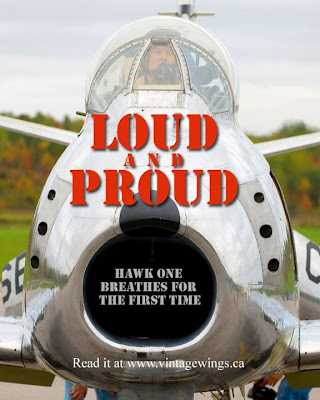 Ladies and Gentlemen Aviators
Last week, Hawk One came to life for the first time, turning gallons of kerosene into hellish noise out on the Gatineau ramp. If you couldn’t hear it, then at least see it. Follow the link to learn more: http://www.vintagewings.ca/page?s=63&lang=en-CA If you wish to be added to or removed from our list let us know.Dave O'Malley, Manager Marketing and CommunicationsVintage Wings of Canada
Posted by Randy at 11:13 PM No comments:

It is with deep sadness that we inform you of the death of Charles (Chuck) Senecal of Moose Jaw SK on October 9 2008. Chuck was killed in a aircraft crash while taking photographs on duty.
Our sympathies go to his family.

Pat and Terri McElroy
Military Photographers Association
Courtenay BCCanada
Story by CBC
Military identifies pilot, photographer killed in Snowbirds crash
Last Updated: Friday, October 10, 2008 6:48 PM CT
CBC News
Military officials have identified the pilot and photographer who died when a Snowbirds jet crashed during a training mission Thursday at 15 Wing Moose Jaw, the aerobatic squadron's home base in southwest Saskatchewan.Capt. Bryan 'Mav' Mitchell was killed in Thursday's crash. (DND)
The pilot was Capt. Bryan (Mav) Mitchell, 46, and the photographer was Sgt. Charles (Chuck) Senecal, 49, the military said in a news release issued Friday afternoon.
The plane hit the ground about two kilometres northwest of the base's boundary, between the base and the nearby city of Moose Jaw.
The plane had been in the air for about 45 minutes while Senecal took photographs of three other planes flying in formation. It crashed at 12:37 p.m. Thursday.
Col. Paul Keddy, wing commander, called it a routine mission.
At a news conference on Friday, Keddy said that Mitchell was scheduled to fly with the Snowbirds aerobatics team in the 2009 show season.
Pilots who have been selected for the team, but who have not yet finished their training, are part of the Snowbirds' home team. That group, which also includes technicians and other support staff, remains at 15 Wing Moose Jaw while the nine performance jets are on tour. A tenth plane also travels to performances.
Maj. Rob Mitchell, commander of Snowbirds squadron, said from San Francisco, where the performance team had shows scheduled for the weekend, that everyone associated with the group was "deeply saddened."Sgt. Charles 'Chuck' Senecal, a veteran military photographer, also died in the crash. (DND)
Keddy said a practice, scheduled for Friday, had been cancelled and no decision had been taken as to whether the planes would do their formation show in San Francisco. Flights at the base have also been suspended. Keddy said it was precautionary and would be reviewed in the coming day.
The crash left twisted wreckage in a farmer's field.
Ronald Alix, an eyewitness to the crash, told CBC News that he saw black smoke trailing from the plane, which was on a dangerous trajectory.
"I said well, it's gonna hit the ground. Sure enough, it went and crashed on the ground," Alix said on Thursday.
Keddy said it was still not known what caused the crash. Investigators from the base and experts from Ottawa were set to begin their work on Friday. Keddy did reveal that there were no communications from the pilot in the moments prior to impact.
"Despite the age of the Tutor in other fleets in many parts of the world … the Canadian Forces aircraft are the most well-maintained aircraft in the world," Keddy said.
"They've served us over the years and continue to serve the air force and will do well into the future."
The Snowbirds plane was in the air with three other aircraft from the base: a Hawk, a Harvard and another Tutor. Those planes were flying different formations to be photographed by Senecal for use in various promotional materials.
The other planes returned to base safely.
Mitchell was from Whiterock, B.C. He had a wife and two daughters. Senecal was originally from Montreal. He had a wife and son.
As of Thursday, eight people, including seven pilots, have died in crashes of Snowbird jets since the team was formally inaugurated in 1971.
June 10, 1972 — Capt. Lloyd Waterer, 24, died during an air show at CFB Trenton, Ont.
May 3, 1978 — Capt. Gordon de Jong, 32, died during air show in Grande Prairie, Alta.
Sept. 3, 1989 — Capt. Shane Antaya, 24, died when his plane plunged into Lake Ontario during an air show in Toronto.
Dec. 10, 1998 — Capt. Michael VandenBos, 29, died in a pre-season training collision with another Snowbird, south of Moose Jaw. The other pilot survived.
Dec. 10, 2004 — Capt. Miles Selby, 31, died in a collision during a training session. The other pilot survived.
May 18, 2007 — Capt. Shawn McCaughey, 31, died in a crash while practising for an air show at Malmstrom Air Force Base in Great Falls, Mont.
There have also been eight occasions where Snowbird planes have crashed or collided and the pilots survived.
The CT-114 jet has been in service since 1962 and was adopted as the Snowbird plane in 1971.
Posted by Randy at 11:02 PM No comments:

See the SCTA website link for the news at Bonneville and you will see the following message!
Salt Update, Sunday 7:00am
Due to recent rains that flooded the course we are canceling the World Finals Event.
Roy Creel
Posted by Randy at 9:52 PM No comments: