Unsatisfactory Condition Report or UCR as my retired RCAF friends and those serving in the Canadian Armed Forces will recognize the term as something, "not good "!              Caused by driver error.
In our last run  at Speedweek 2010 we suffered an exhaust failure and a small fire resulted in critical wiring and hoses being cooked. The result was we never, started the engine until this spring. It took a small shot of ether to fire up and there was an unusual amount of white smoke. We decided to tear it down to investigate the problem. But first, at the suggestion of some  friends with diesel knowledge, we performed a "HIGH IDLE TEST" ,which I was not normally prepared to do but for the fact the engine had to come apart anyway. Now let me describe this high idle test, it just means that you open the throttle to see how many rpm it will turn. Not something I have even dreamed of doing with an engine, race prepared or not.
So, prior to tear down, Werner equipped with a laser tachometer and me managing the throttle,  proceeded to find out that the valves floated at 4780 rpm. Not high for a light weight gas motor but quite high for a heavy duty diesel. When it pushed oil out of the crankcase breather, we knew that there was a serious problem.
﻿﻿﻿﻿﻿﻿
﻿﻿﻿﻿﻿﻿﻿ ﻿﻿﻿﻿﻿﻿﻿ ﻿﻿﻿﻿﻿﻿
﻿
﻿ When we tore it down we found that during the run at Bonneville, I had fed it way too much nitrous for the available fuel at that moment. I also in frustration with the lack of speed, I held the nitrous buttons down for a long time instead of doing what I knew was the right thing, release the buttons instead I was trying different overdrive setting hoping it would take off. When  you add nitrous no increase  in power is evident  means no fuel. It is that simple!! My fault entirely. lesson two  don't listen to people that tell you to do what you think is just wrong, unloaded engine at full throttle is bad move!
Damage: 4 pistons to replace, 4 intake valves to replace, cylinders will have to be bored .020 oversize  and the cam shaft checked by COLT CAMS for damage.
I am embarrassed to admit all this but it is only the second time in all my racing days that I have lost an engine.
Landspeed Louise warned me, "It is not like drag racing, Randy and your a rookie out here!" I agree.
Posted by Randy at 8:02 PM No comments:

May 28, 2011, Indianapolis Motor Speedway–
The 2010 All American Racing Writers & Broadcasters Association (AARWBA) Contest winners were announced at the annual breakfast held in the shadow of the famed racetrack’s turn two. Now in its fourth decade, the annual competition attracts entries from across the nation as well as from around the world.

Both honors were awarded for her long-running, monthly Fuel For Thought column in the Goodguys Gazette. “Attitude, Gratitude, and Talking Race Cars” which ran in December 2010 earned the Magazine Column Writing top slot in the nation. For the Magazine Technical category win it was the January 2010 column, “Brain-Bucket Beef,” that judges gave the nod.

AARWBA President Ms. Dusty Brandel noted, “I loved to see the lady journalists finally getting proper recognition for all their hard work.”

In the male dominated motorsports world it is significant to note that women swept all three slots in Online News Reporting, finished one-two in three other categories and earned a total of 17 “podium” finishes overall for 2010.

Special note: This master word-crafter has always been supportive of the Goldenhawk Project and is the first media person to pop by the pits each year at Speedweek to wish us well. All of the Salt team and many of our sponsors treasure her beautiful book, BONNEVILLE SALT FLATS. I suggest you find a copy as it is the best book about landspeed racing.
Visit http://www.landspeedproductions.biz/ to learn more about our favorite photojournalist!
Posted by Randy at 7:05 PM No comments: 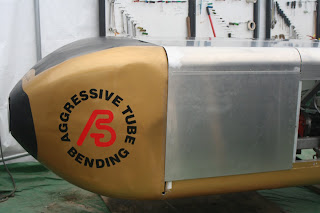 The first side panel is in place and hinged. Kevin is mastering the technique of dealing with the myriad of dimensional changes in the car.
AND he hasn't sworn once at me for the design.
You will notice that the hood now opens much the same as many cars from earlier years. Back in the day when repairs were made with hay baling wire and ingenuity. 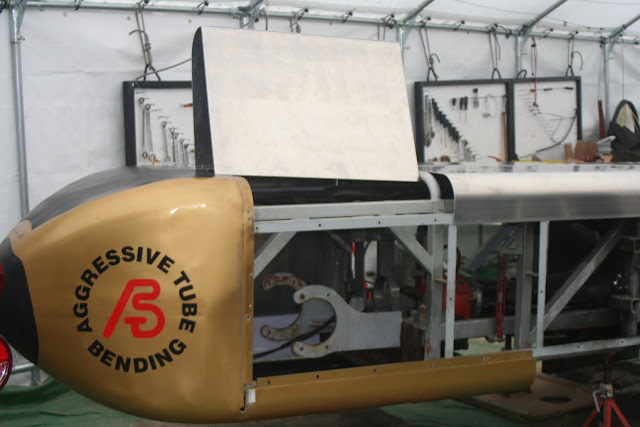 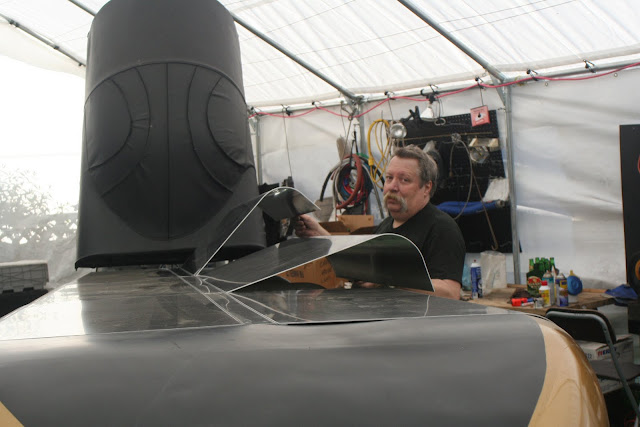 Kevin is checking to make sure all the hood panels open and close properly and with an even gap between them before proceeding to hang the second panels, the side panels.
It should be noted that this is a very challenging task due to the ever changing dimensions of the car. Remember to be aerodynamic it is 6 degrees of centre as it goes back from the nose to the tail. Therefore each panel is unique!!
Notice the canopy cover to protect it against damage on the road or in the shop. It was made by Craig of DICK'S UPHOLSTERY in Richmond BC. and is doing a fine job after 21/2 years.
Posted by Randy at 12:27 PM No comments: 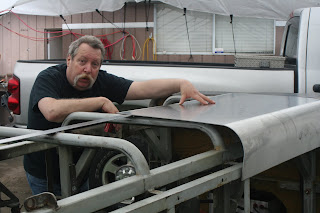 Kevin is trial fitting the first hood panel to the strip he mounted on the centre line of the car.

Now he has the first hinged panel installed, Tina (wife) is doing quality inspection.  It passed! 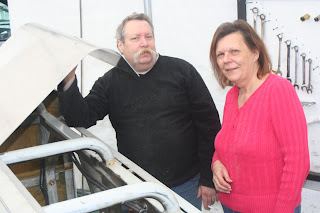 This time Kevin (http://www.kevinknox.com)/ is changing the material to aluminum, .1000 thick and bent to his specifications exactly by LONESTAR Industries Ltd. http://lonestarstainless.com/ Langley, BC. 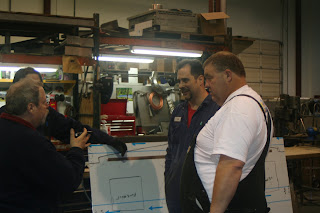 These were edited by Micheal the Jeweler in Aldergrove, BC. Thanks, you did good considering it is your first attempt at video editing. Micheal does custom jewelry check out his website too.

#1-The footage is courtesy of  Mark Brazeau of http://www.landspeedracingvideo.com/
Be sure to order your copies of the full years of coverage at Bonneville.
http://www.youtube.com/watch?v=zh4YRHAMIAE&NR=1

#2- Yuri Tofini of AGGRESSIVE TUBE BENDING steers  the car to the start line and Werner is pushing in his "bling lil dodge" pickup for first run in 2009.
http://www.youtube.com/watch?v=0xvy32WoVNo&feature=related

#3-Thanks to our musical sponsor TROOPER  http://www.trooper.com/  They wrote this music years ago but it is appropriate for the Goldenhawk Racing team and  "for my money the world's best rock band."
http://www.youtube.com/watch?v=iK56P6vGwBc&NR=1

#4- This is from 2010 Speedweek and the last run we made. It shows Dean's footage from the pits and the aftermath of the exhaust ignited fire.
http://www.youtube.com/watch?v=zEqjxoHsGIg&NR=1

#5- Forming the nose at Plastec in 2007 this was the first piece to be vacuum formed from Kevin Burnett's handmade plug! Shown are Kevin B, Pat Colgen and Barry Clarke on forklift. (Barry is the owner of PLASTEC in Port Kells,BC.)
http://www.youtube.com/watch?v=S9In_cGvGnA&feature=related
You may have seen these most are from 2009 Speedweek.

Check out G'Hawk on ARP blog

Thanks to ARP our engine is securely fastener to with stand the high rpm we are demanding from the Cummins 4bt. I would definitely recommend anyone building engines or race cars to use AMERICA RACE PRODUCTS anywhere  that requires extra strength and clamping forces.
click here
http://arp-bolts.com/pages/Contest_Display.php?_ID_ApprovedNumber=00007
Posted by Randy at 10:54 AM No comments:

During tech inspection at Speedweek 2010 last year, there was some concern about the placement of the nitrous lines. Some inspectors did not consider the mandatory DJ Safety,(SFI 4.1) explosion blanket on the automatic, covering the torque converter to be adequate. The reasoning was that it still is subject to: "All fuel lines in the area of the clutch and flywheel shall run though heavy steel tubing or outside the frame rails regardless, of the presence of a scattersheild.". Considering the nitrous is actually not fuel, or that there is no flywheel or clutch in the car, we still moved things to pass inspection. As a person with many years of observation of the changing rules in NHRA particularly, I understand where most of the rules originated and also why they remain albeit not always clarified as things change or are added.
Therefore Kevin and I decided to avoid future arguments and build a 1/4 inch thick addition to the frame that places the lines outside the frame and still protects them from any form of explosion. Note the GREEN Shield in the rendering.  Once again, it always easier to change the car than the interpretation of the rule book.
I would like to thank the Safety and tech inspectors for their diligence and dedication to our safety!
Posted by Randy at 10:45 AM No comments:

Death in the Landspeed Family 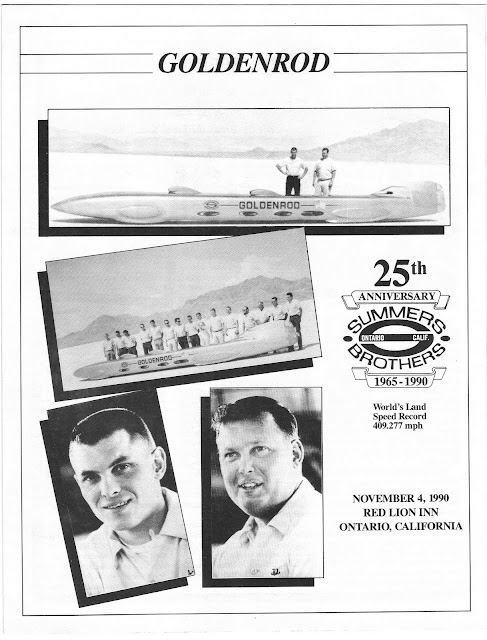 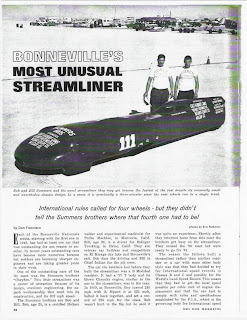 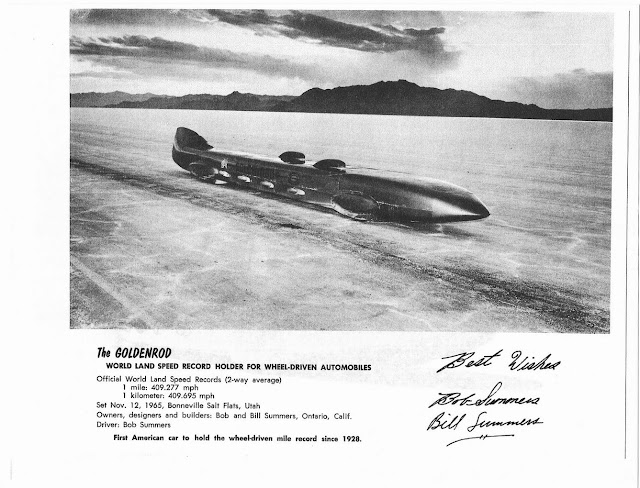